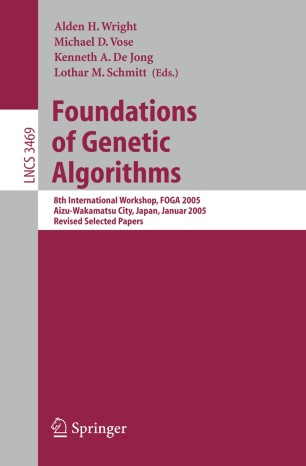 The8thWorkshopontheFoundationsofGeneticAlgorithms,FOGA-8,washeld at the University of Aizu in Aizu-Wakamatsu City, Japan, January 5–9, 2005. This series of workshops was initiated in 1990 to encourage further research on the theoretical aspects of genetic algorithms, and the workshops have been held biennially ever since. The papers presented at these workshops are revised, edited and published as volumes during the year following each workshop. This series of (now eight) volumes provides an outstanding source of reference for the theoretical work in this ?eld. At the same time this series of volumes provides a clear picture of how the theoretical research has grown and matured along with the ?eld to encompass many evolutionary computation paradigms including evolution strategies (ES), evolutionary programming (EP), and genetic programming (GP), as well as the continuing growthininteractionswith other ?elds suchas mathematics,physics, and biology. Atraditionoftheseworkshopsisorganizetheminsuchawayastoencourage lots of interaction and discussion by restricting the number of papers presented and the number of attendees, and by holding the workshop in a relaxed and informal setting. This year’s workshop was no exception. Thirty-two researchers met for 3 days to present and discuss 16 papers. The local organizer was Lothar Schmitt who, together with help and support from his university, provided the workshop facilities. Aftertheworkshopwasover,theauthorsweregiventheopportunitytorevise their papers based on the feedback they received from the other participants.