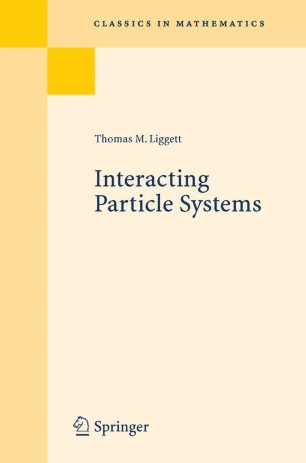 "[...] This book presents a complete treatment of a new class of random processes, which have been studied intensively during the last fifteen years. None of this material has ever appeared in book form before. …The high quality of this work, on a technically difficult subject, makes a fascinating subject and its open problem as accessible as possible. [...]F.L. Spitzer in Mathematical Reviews, 1986

" [...] This book, the first monographic presentation of this important and rapidly developing theory, will prove indispensable to every serious student of stochastics [...]" S. Gacsályi in Publicationes Mathematicae, 1986

"[...] However, it can be said that the author has succeeded in what even experts are seldom able to achieve: To write a clearcut and inspiring book on his favorite subject which meets most, if not all requirements which can be imposed on a comprehensive text on an important new field. The author can be congratulated on his excellent presentation of the theory of interacting particle systems. The book is highly recommended to everyone who works on or is interested in this subject: to probabilists, physicists and theoretical biologists. [...]"
G. Rosenkranz in Methods of Information in Medicine, 1986

Thomas Liggett was born on March 29, 1944 in Danville, Kentucky. At the age of two, he moved with his missionary parents to Latin America. His early education took place primarily in Buenos Aires, Argentina and San Juan, Puerto Rico. He attended college at Oberlin, where he became interested in probability theory under the influence of Samuel Goldberg, who had been a student of William Feller. He continued his study of probability at Stanford, taking many classes with Kai Lai Chung, and writing a thesis on problems related to the invariance principle with Samuel Karlin. In 1969 he joined the UCLA faculty; he has spent his entire career there. In addition to his teaching and research activities, he has been active in academic administration, serving as vice-chair and chair of the UCLA Department of Mathematics.

Liggett was chief editor of The Annals of Probability in 1985-87. He was a Sloan and a Guggenheim Fellow, spoke at the the 1986 International Congress of Mathematicians, and was the 1996 Wald Memorial Lecturer for the Institute of Mathematical Statistics.

Professor Liggett's interest in interacting particle systems began shortly after his move to UCLA, when he read a preprint of Frank Spitzer's fundamental 1970 paper. It is an unusual paper, in that it is much more concerned with descriptions of models and statements of open problems than with proofs of theorems. It provided an ideal way for a young probabilist to test his mettle: The challenge was to solve as many of Spitzer's problems as he could. The subject of interacting particle systems has continued to be the main focus of his research. He has written two books (the other is

Stochastic Interacting Systems: Contact, Voter and Exclusion Processes) and over 60 papers in this area. He has also contributed to a number of other fields, including nonlinear semigroups, subadditive ergodic theory, negative dependence, optimal stopping, combinatorics, random graphs, and renewal theory.

"This is a paperback reprint, in Springer’s Classics in Mathematics series, of a book originally published in 1985 in the Grundlehren series. … The reprint is well-made and easy to read. It will be welcomed by all specialists in the field." (Fernando Q. Gouvêa, MathDL, January, 2005)

"The book enjoys its well-deserved reputation, it still gives a good overview of relevant models and a number of useful methods, it is clear and reliable … and deserves to be consulted by any serious researchers in mathematics or statistical physics who is interested in stochastic evolutions of many-particle (or many-spin) systems. … Springer’s decision to republish it as a "Classic in Mathematics’, making it available at an affordable price, thus is very welcome." (A. C. D. van Enter, Zentralblatt MATH, Vol. 1103 (5), 2007)