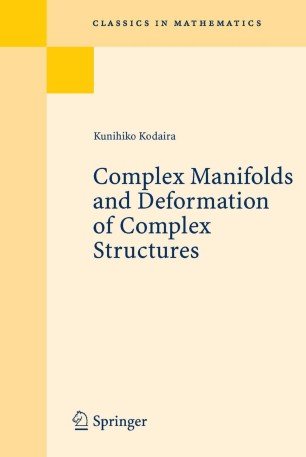 "The author, who with Spencer created the theory of deformations of a complex manifold, has written a book which will be of service to all who are interested in this by now vast subject. Although intended for a reader with a certain mathematical maturity, the author begins at the beginning, [...]. This is a book of many virtues: mathematical, historical, and pedagogical. Parts of it could be used for a graduate complex manifolds course."
J.A. Carlson in Mathematical Reviews, 1987

"There are many mathematicians, or even physicists, who would find this book useful and accessible, but its distinctive attribute is the insight it gives into a brilliant mathematician's work. [...] It is intriguing to sense between the lines Spencer's optimism, Kodaira's scepticism or the shadow of Grauert with his very different methods, as it is to hear of the surprises and ironies which appeared on the way. Most of all it is a piece of work which shows mathematics as lying somewhere between discovery and invention, a fact which all mathematicians know, but most inexplicably conceal in their work."
N.J. Hitchin in the Bulletin of the London Mathematical Society, 1987

Kunihiko Kodaira was born on March 16, 1915 in Tokyo, Japan. He graduated twice from the University of Tokyo, with a degree in mathematics in 1938 and one in physics in 1941. From 1944 until 1949, Kodaira was an associate professor at the University of Tokyo but by this time his work was well known to mathematicians worldwide and in 1949 he accepted an invitation from H. Weyl to come to the Institute for Advanced Study. During his 12 years in Princeton, he was also Professor at Princeton University from 1952 to 1961. After a year at Harvard, he was then appointed in 1962 to the chair of mathematics at Johns Hopkins University, which he left in 1965 for a chair at Stanford University. Finally, after 2 years at Stanford, he returned to Japan to Tokyo University from 1967. He died in Kofu, Japan, in 1997.

Kodaira’s work covers many topics, including applications of Hilbert space methods to differential equations, harmonic integrals , and importantly the application of sheaves to algebraic geometry. Around 1960 he became involved in the classification of compact complex analytic spaces. One of the themes running through much of his work is the Riemann-Roch theorem and this played an important role in much of his research.

Kodaira received many honours for his outstanding research, in particular the Fields Medal, in 1954.