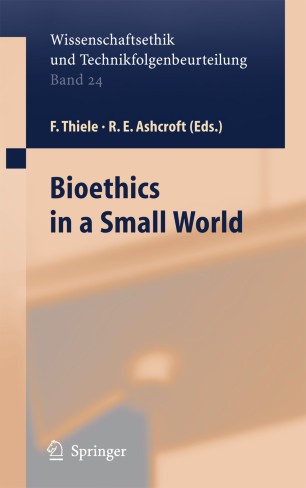 Bioethics in a Small World

The world seems ever smaller and ever quicker: environmental, public health, industrial and cultural processes operate ever more on a global, rather than a local scale. Does this process, sometimes known as globalisation, draw us closer together, or drive us further apart, from a moral point of view? In recent years, bioethics has addressed many of the issues that arise in the context of globalisation: solidarity, conflict, and autonomy; human rights, liberty and toleration; the political and economic context of health care and inequalities in health; environmental and public health change. At the same time, bioethics has often been merely an agent of obscure political forces, and has been challenged for its emphasis on autonomy over considerations of justice. This study brings together scientists from the fields of medicine, law, and philosophy. The texts are the results of a conference the Europäische Akademie held in 2003. The group developed its thesis in open discussions of foundational and applied problems of bioethics from an interdisciplinary and international perspective.