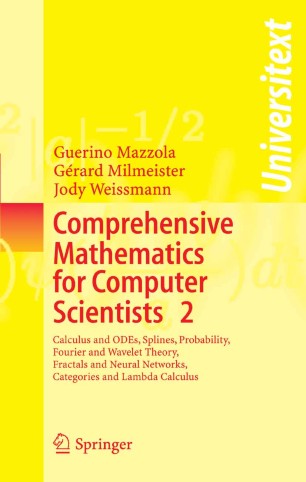 This second volume of a comprehensive tour through mathematical core subjects for computer scientists completes the ?rst volume in two - gards: Part III ?rst adds topology, di?erential, and integral calculus to the t- ics of sets, graphs, algebra, formal logic, machines, and linear geometry, of volume 1. With this spectrum of fundamentals in mathematical e- cation, young professionals should be able to successfully attack more involved subjects, which may be relevant to the computational sciences. In a second regard, the end of part III and part IV add a selection of more advanced topics. In view of the overwhelming variety of mathematical approaches in the computational sciences, any selection, even the most empirical, requires a methodological justi?cation. Our primary criterion has been the search for harmonization and optimization of thematic - versity and logical coherence. This is why we have, for instance, bundled such seemingly distant subjects as recursive constructions, ordinary d- ferential equations, and fractals under the unifying perspective of c- traction theory.