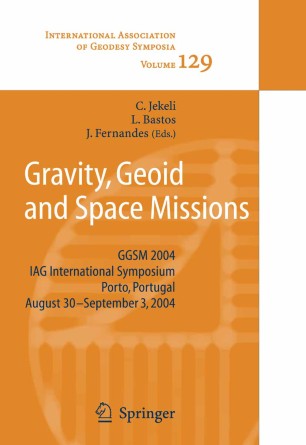 The lAG International Symposium on Gravity, Geoid, and Space Missions 2004 (GGSM2004) was lield in the beautiful city of Porto, Portugal, from 30 August to 3 September 2004. This symposium encompassed the themes of Commission 2 (Gravity Field) of the newly structured lAG, as well as interdisciplinary topics related to geoid and gravity modeling, with special attention given to the current and planned gravi- dedicated satellite missions. The symposium also followed in the tradition of mid-term meetings that were held between the quadrennial joint meetings of the International Geoid and Gravity Commissions. The previous mid-term meetings were the International Symposia on Gravity, Geoid, and Marine Geodesy (Tokyo, 1996), and Gravity, Geoid, and Geodynamics (Banff, 2000). GGSM2004 aimed to bring together scientists from different areas in the geosciences, working with gravity and geoid related problems, both from the theoretical and practical points of view. Topics of interest included the integration of heterogeneous data and contributions from satellite and airborne techniques to the study of the spatial and temporal variations of the gravity field. In addition to the special focus on the CHAMP, GRACE, and GOCE satellite missions, attention was also directed toward projects addressing topographic and ice field mapping using SAR, LIDAR, and laser altimetry, as well as missions and studies related to planetary geodesy.