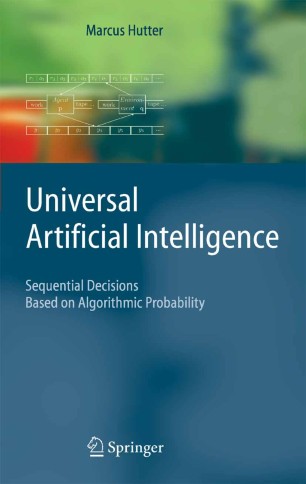 Sequential Decisions Based on Algorithmic Probability

The book introduces these two well-known but very different ideas and removes the limitations by unifying them to one parameter-free theory of an optimal reinforcement learning agent embedded in an arbitrary unknown environment. Most if not all AI problems can easily be formulated within this theory, which reduces the conceptual problems to pure computational ones. Considered problem classes include sequence prediction, strategic games, function minimization, reinforcement and supervised learning. The discussion includes formal definitions of intelligence order relations, the horizon problem and relations to other approaches to AI. One intention of this book is to excite a broader AI audience about abstract algorithmic information theory concepts, and conversely to inform theorists about exciting applications to AI.

Marcus Hutter received his masters in computer sciences in 1992 at the Technical University in Munich, Germany. After his PhD in theoretical particle physics he developed algorithms in a medical software company for 5 years. For four years he has been working as a researcher at the AI institute IDSIA in Lugano, Switzerland. His current interests are centered around reinforcement learning, algorithmic information theory and statistics, universal induction schemes, adaptive control theory, and related areas.