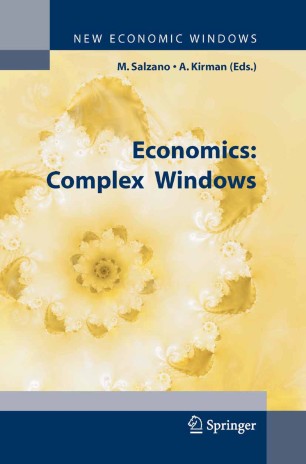 Economics: Complex Windows, does not present contributions to the sterile debate as to the merits of the different grand, or potentially grand paradigms of economics. Rather it offers a balanced collection of methodological advances which can be applied to concrete economic problems. Starting with a presentation of the "complexity approach" to economics, it goes on to provide a collection of applications to areas such as the analysis of market imperfections, risk assessment, non-linear dynamics, forecasting and highly irregular fluctuations. The tools used help to provide a clearer understanding and a more accurate analysis of these areas of economics. They also highlight the gulf which exists between current economic theory and real economic practice. The basic idea is to encourage economic researchers to embrace a more open and pragmatic approach to economics rather than to reluctantly move in this direction as if it were somehow a betrayal of established dogma. We hope, in this way, to open up avenues which will lead to progress beyond the "holy trinity", (rationality, equilibrium and greed) of modern economics.

Referee for the International Joint Conference on Neural Networks (IJCNN) 2000

Professor of Public Finance, University of Salerno, Faculty of Economics, since 1997/98

Professor of Public Finance, International Master in Economics & Complexity, University of Salerno, Faculty of Economics, since 2001

Visiting Lecturer in Public of Economics, University of Nizhni Novgorod (ex U.R.S.S.) since 1993 to 1997;

Organiser of Special Section in Economics of the 11th Italian Workshop on Neural Nets Wirn-Vietri99.

Scientific Co-ordinator of the Conference"Complexity Theory in Public Economics: Economic, Financial and Social