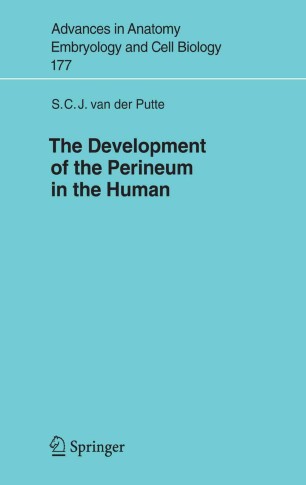 The Devlopment of the Perineum in the Human

For over a century, the development of the perineum has received ample attention because of the striking complexity of its formation and malformation. In the prolonged disputes at this subject, normal and abnormal development became intricately interwoven and ideas about the normal process were often directed by the anomalies.

The unexpected results from an investigation into hereditary congenital anorectal malformations of pig embryos demonstrated the weakness of such interpretations and constructions and underlined the need for a new inquiry into the normal development of the area in human embryos. They showed that although data from malformations may offer extra information about the normal development of the area, great care has to be taken in using that information for the reconstruction of its normal development which should be based first and foremost on the observation of the evolving microscopic anatomy of the region.

To avoid the inconsistencies caused by fragmented research in the past, such an investigation should comprise the whole structure of the region from its incipience to birth. The present study offers such a survey. It contradicts current opinion on major developmental events and gives new insights into the origin of the urinary bladder, the subdivision of the cloaca, the transformation of the cloacal mantle into the erectile, fascial and muscular structures of the female and male perineum, and also corrects existing ideas about the formation of the vagina, urethra and vestibulum in the female and the urethra, penis and scrotum in the male. These new findings will be indispensable in unravelling the pathogenesis of challenging perineal malformations.