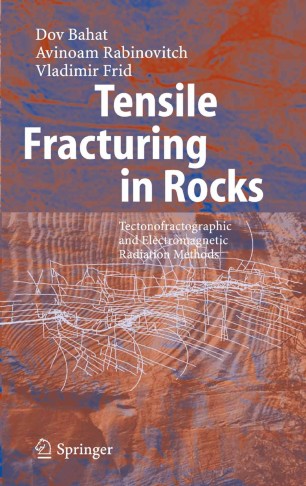 ‘Tensile Fracturing in Rocks’ presents field observations on fracturing of sedim- tary rocks and granite outcrops from various provinces in three continents. It also combines results of recent experiments conducted at different laboratories around the world with current theories on fracturing. In treating faults, this book limits itself to faults that are associated with joint sets produced by definable causes and occasi- ally to cases where interaction between the two types of fracture – faults and joints – is not clear. The book’s subject matter is divided over six chapters, which are briefly described below. Chapter 1 summarizes current key concepts in fracture physics. It starts with a pr- entation of the elastic theory of fracture, and concentrates on the results of linear el- tic fracture mechanics. The chapter touches also upon other fracture properties, e.g., crack nucleation, dynamic fracturing and slow fracturing processes. Nucleation is - dressed by statistical mechanics methods incorporating modern approaches of th- mal and fiber bundle processes. The analyses of dynamic fracturing and slow fract- ing focus on the differences, as compared to the linear elastic approach. The cont- versy in interpreting experimental dynamic results is highlighted, as are the surface morphology patterns that emerge in fracturing and the non-Griffith crack extension criterion in very slow fracturing processes.