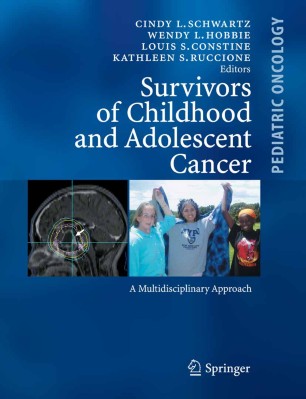 Survivors of Childhood and Adolescent Cancer

It was not long ago that clinicians would say,“study ed at the 1975 meeting revealed. Among them was the late complications of cancer treatments we give to one based on data collected by the Late Effects Study children? You must be joking! We can start worrying Group, an international consortium that consisted about that when we start curing them! Meanwhile, initially of ?ve, then ten, pediatric centers. This was cure must be our only aim. ”These practitioners were the ?rst large scale, cooperative unit of its kind, - only partially correct in what seemed to be a glaring ganized speci?cally for the purpose of studying the truth, for, in fact, increasing numbers of children late effects of cancer therapy (the study of delayed were beginning to survive their malignancy,and the complications had been included as part of the or- long-term consequences of therapy would soon be- inal design in the National Wilms Tumor Study come critical. launched in 1969) [1]. These historical notes demon- It is well to remember that the delayed conse- strate that the epidemiologic,statistical and reco- quences of a cancer treatment delivered to develop- keeping mechanisms necessary for studying lo- ing organisms were ?rst studied long ago. It has been term survivors effectively were in the process of be- 100 years since Perthes reported in 1903 that growth ing established decades before the meeting in 1975.