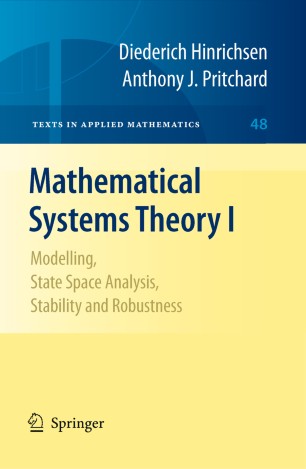 This book presents the mathematical foundations of systems theory in a self-contained, comprehensive, detailed and mathematically rigorous way.

This first volume is devoted to the analysis of dynamical systems with emphasis on problems of uncertainty, whereas the second volume will be devoted to control. It combines features of a detailed introductory textbook with that of a reference source. The book contains many examples and figures illustrating the text which help to bring out the intuitive ideas behind the mathematical constructions. It is accessible to mathematics students after two years of mathematics and graduate engineering students specializing in mathematical systems theory. The reader is gradually brought to the frontiers of research in stability and robustness analysis. As such the book will be useful for established researchers in systems theory as well as mathematicians and engineers interested in the mathematical foundations of systems and control.

"This textbook on finite-dimensional time-invariant linear systems theory ... links up with the extensive research contributions of the authors, geared towards developing a spectral theory for uncertain systems. ... is bound to become a standard textbook and reference in its area." M. Kawski, Mathematical Reviews, 2005

"... the content ranges from rigorous proofs of basic results in linear systems theory to new results on the research frontier. In that sense, the book also serves as a valuable research reference." W.J. Satzer, MathDL, May, 2005

"I heartily recommend this book as a remarkably complete reference for researchers doing theoretical work involving linear systems. The book is a unique compilation of the mathematics underlying the field, and I look forward to seeing the authors' treatment of synthesis problems in the second volume." Brian Ingalls, IEEE Control Systems Magazine, April 2006

"MST-1 can be properly deemed an essential addition to the personal library of any researcher in systems theory. ...the authors indicate that MST-I was developed over a twenty-year period and the enormous effort that they have invested in writing the book is readily apoparent. MST-I is a superb exposition of advanced aspects of linear systems theory and is highly recommended for graduate students and researchers who have some prior background in control-systems and who have specific interests in problems of stability, robustness, and uncertainty. If the authors are able to maintain their high standards of exposition through the promised second volume, then MST-I and -II are destined to be placed among the pre-eminent authoritative references for the area of controlled dynamical systems." K.A. Grasse, IEEE Trans. Automatic Control 51, April 2006