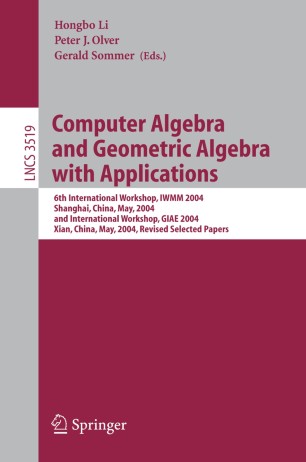 MathematicsMechanization consistsoftheory,softwareandapplicationofc- puterized mathematical activities such as computing, reasoning and discovering. ItsuniquefeaturecanbesuccinctlydescribedasAAA(Algebraization,Algori- mization, Application). The name “Mathematics Mechanization” has its origin in the work of Hao Wang (1960s), one of the pioneers in using computers to do research in mathematics, particularly in automated theorem proving. Since the 1970s, this research direction has been actively pursued and extensively dev- oped by Prof. Wen-tsun Wu and his followers. It di?ers from the closely related disciplines like Computer Mathematics, Symbolic Computation and Automated Reasoning in that its goal is to make algorithmic studies and applications of mathematics the major trend of mathematics development in the information age. The International Workshop on Mathematics Mechanization (IWMM) was initiated by Prof. Wu in 1992, and has ever since been held by the Key L- oratory of Mathematics Mechanization (KLMM) of the Chinese Academy of Sciences. There have been seven workshops of the series up to now. At each workshop, several experts are invited to deliver plenary lectures on cutting-edge methods and algorithms of the selected theme. The workshop is also a forum for people working on related subjects to meet, collaborate and exchange ideas.