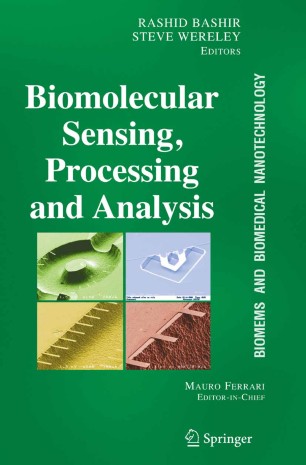 Rashid Bashir completed his Ph.D. in 1992. From Oct 1992 to Oct 1998, he worked at National Semiconductor in the Process Technology Development Group as Sr. Engineering Manager. He is currently a Professor of Electrical and Computer Engineering and Courtesy Professor of Biomedical Engineering at Purdue University. He has authored or coauthored over 100 journal and conference papers, has over 25 patents, and has given over 30 invited talks. His research interests include biomedical microelectromechanical systems, applications of semiconductor fabrication to biomedical engineering, advanced semiconductor fabrication techniques, and nano-biotechnology. In 2000, he received the NSF Career Award for his work in Biosensors and BioMEMS. He also received the Joel and Spira Outstanding Teaching award from School of ECE at Purdue University, and the Technology Translation Award from the 2001 BioMEMS and Nanobiotechnology World Congress Meeting in Columbus, OH. He was also selected by National Academy of Engineering to attend the Frontiers in Engineering Workshop in Fall 2003. https://engineering.purdue.edu/LIBNA

Professor Wereley completed his masters and doctoral research at Northwestern University and joined the Purdue University faculty in August of 1999 after a two-year postdoctoral appointment at the University of California Santa Barbara in the Department of Mechanical and Environmental Engineering. At UCSB he focused exclusively on developing diagnostic techniques for microscale systems, work which ultimately led to developing, patenting, and licensing to TSI, Inc., the micro-Particle Image Velocimetry technique. His current research interests include designing and testing microfluidic MEMS devices, investigating biological flows at the cellular level, improving micro-scale laminar mixing, and developing new micro/nano flow diagnostic techniques. Professor Wereley has co-authored Fundamentals and Applications of Microfluidics, Artech House, 2002.

Professor Mauro Ferrari is a pioneer in the fields of bioMEMS and biomedical nanotechnology. As a leading academic, a dedicated entrepreneur, and a vision setter for the Nation's premier Federal programs in nanomedicine, he brings a three-fold vantage perspective to his roles as Editor-in-Chief for this work. Dr. Ferrari has authored or co-authored over 150 scientific publications, 6 books, and over 20 US and

Several private sector companies originated from his laboratories at the Ohio State University and the University of California at Berkeley over the years. On a Federal assignment as Special

Expert in Nanotechnology and Eminent Scholar, he has provided the scientific leadership for the development of the Alliance for Cancer Nanotechnology of the National Cancer Institute, the world-largest medical nanotechnology operation to date. Dr. Ferrari trained in mathematical physics in Italy, obtained his Master's and Ph.D. in Mechanical