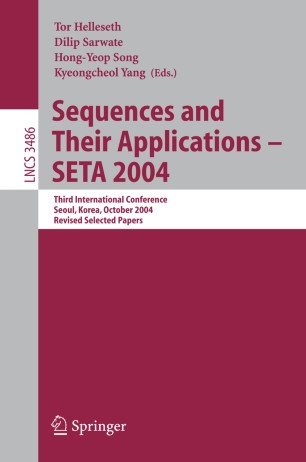 SETA: International Conference on Sequences and Their Applications

Sequences and Their Applications - SETA 2004

This volume contains the refereed proceedings of the 3rd International Conf- ence on Sequences and Their Applications (SETA 2004), held in Seoul, Korea during October 24–28, 2004. The previous two conferences, SETA 1998 and SETA 2001, were held in Singapore and Bergen, Norway, respectively. These conferences are motivated by the many widespread applications of sequences in modern communication systems. These applications include pseudorandom sequences in spread spectrum systems, code-division multiple-access, stream ciphers in cryptography and several connections to coding theory. The Technical Program Committee of SETA 2004 received 59 submitted - pers, many more than the submissions to previous SETA conferences. The C- mittee therefore had the di?cult task of selecting the 33 papers to be presented at the Conference in addition to four invited papers. The authors of papers p- sented at the conference were invited to submit full papers that were refereed before appearing in this proceedings. These proceedings have been edited by the Co-chairs of the Technical P- gram Committee for SETA 2004: Tor Helleseth of the University of Bergen, Norway, and Dilip Sarwate of the University of Illinois at Urbana-Champaign, USA, and Technical Program Committee members Hong-Yeop Song of Yonsei University, Korea, and Kyeongcheol Yang of Pohang University of Science and Technology, Korea.