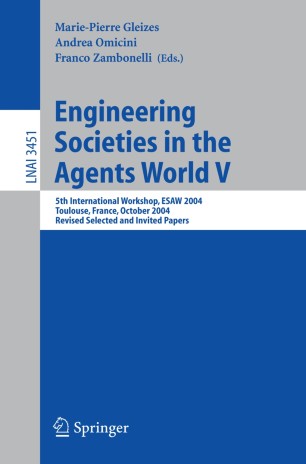 ESAW: International Workshop on Engineering Societies in the Agents World

The ?rst workshop “Engineering Societies in the Agents World” (ESAW) was held in August 2000, in conjunction with the 14th European Conference on Arti?cial Intelligence (ECAI 2000) in Berlin. It was launched by a group of - searchers who thought that the design and development of MASs (multi-agent systems) not only needed adequate theoretical foundations but also a call for new techniques, methodologies and infrastructures to develop MASs as arti?cial societies. The second ESAW was co-located with the European Agent Summer School (ACAI 2001) in Prague, and mostly focused on logics and languages, middleware, infrastructures and applications. In Madrid, the third ESAW c- centrated on models and methodologies and took place with the “Cooperative Information Agents” workshop (CIA 2002). The fourth ESAW in London was the ?rst one that ran as a stand-alone event: apart from the usual works on methodologies and models, it also stressed the issues of applications and m- tidisciplinary models. Based on the success of previous ESAWs, and also given that the di?cult challenges in the construction of arti?cial societies are not yet fully addressed, the ?fth ESAW workshop was organized in the same spirit as its predecessors. Inparticular,ESAW2004tookplaceattheIRITlaboratoryoftheUniversit´ e “Paul Sabatier” (Toulouse, France), at the end of October 2004. It was not - located with any other scienti?c event, in the same way as ESAW 2003. ESAW 2004 remained committed to the use of the notion of MASs as the seeds for animated, constructive and highly interdisciplinary discussions about techno- gies,methodologiesandtoolsfortheengineeringofcomplexdistributedsystems.