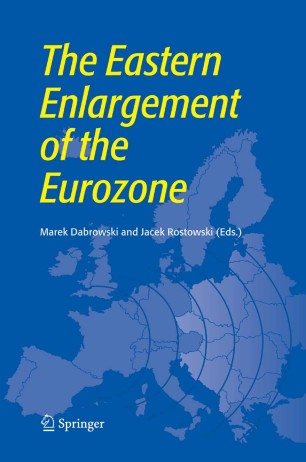 The Eastern Enlargement of the Eurozone

The Eastern Enlargement of the EU will not be complete until the new member states join the EMU. Economic and political economy arguments point to fast EMU accession of new member states. Failure to do so will create a two speed Europe, a fundamental change in the economic and political architecture of the EU, adding to the strains already evident between core and peripheral countries. Current high level of trade and business cycle integration of new member states with the Eurozone, decreases the probability of asymmetric shocks. Lower transaction costs, elimination of exchange rate risk and the danger of currency crises, further trade and investment creation, lower interest rates and large fiscal gains, should outweigh the loss of the exchange rate as adjustment tool. The Eastern Enlargement of the Eurozone provides comprehensive economic analysis of theoretical, empirical and political issues that will determine whether EMU enlargement is a success, which has implications for all common currency systems.

Marek Dabrowski is Professor of Economics, Chairman of the CASE Foundation Council, Chairman of the Supervisory Board of CASE-Ukraine in Kiev, former First Deputy Minister of Finance of Poland (1989-1990) and former Member of the Monetary Policy Council of the National Bank of Poland (1998-2004). In the last decade he has been involved in policy advice and policy research in Belarus, Bosnia and Herzegovina, Bulgaria, Georgia, Iraq, Kazakhstan, Kyrgyzstan, Macedonia, Moldova, Mongolia, Romania, Russia, Serbia, Ukraine and Uzbekistan and in a number of international research projects related to monetary and fiscal policies, currency crises, EU and EMU enlargement, and the political economy of transition.

Jacek Rostowski is Professor of Economics at the Central European University, Budapest, Adviser to the CEO of Bank Pekao, Warsaw, a Member of the CASE Foundation Council, Senior Fellow at CASE, and an Associate of the International Economics Program at the Royal Institute of International Affairs, London. During 1997-2001 he was Chairman of the Macroeconomic Policy Council at the Polish Ministry of Finance and during 2002-4 he was Adviser to the Governor of the National Bank of Poland. He has also advised on the transition from communism in Belarus, Latvia, Russia, Serbia and Ukraine. He has published widely on monetary and financial systems and on the macroeconomics of transition.