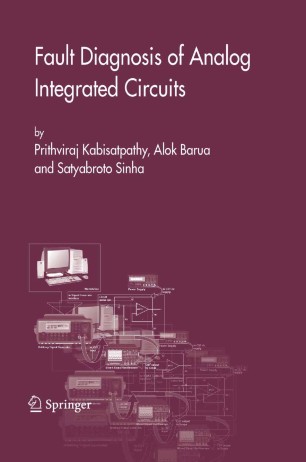 System on Chip (SOC) having both digital and analog circuits has become increasingly prevalent in integrated circuit manufacturing industry. Electronic tests are classified as digital, analog and mixed signal. Current methodologies for the testing of digital circuits are well developed. In contrast, methodologies for the testing of analog circuits remain relatively underdeveloped due to the complex nature of analog signals. Compared to digital testing, analog testing lags far behind in methodologies and tools and therefore demands substantial research and development effort.

Fault Diagnosis of Analog Integrated Circuits is a textbook for advanced undergraduate and graduate level students as well as practicing engineers. The objective of this book is to study the testing and fault diagnosis of analog and analog part of mixed signal circuits. A background in analog integrated circuit, artificial neural network is desirable but not essential.

The text covers the testing and fault diagnosis of both bipolar and Metal Oxide Semiconductor (MOS) circuits. Fault model of the devices in analog domain has been introduced in the text. The test stimulus generations are also discussed in details. Experimental verification of some state of the art techniques has also been presented in the book. It also contains problems that can be used as quiz or homework. This book enables the reader to test an analog circuit that is implemented either in bipolar or MOS technology.