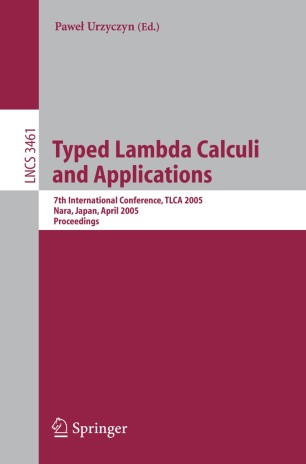 The 7th International Conference on Typed Lambda Calculi and Applications (TLCA 2005) was held in Nara (Japan) from 21 to 23 April 2005, as part of the Joint Conference on Rewriting, Deduction and Programming (RDP 2005). This book contains the contributed papers, and extended abstracts of two invited talks, given by Thierry Coquand and Susumu Hayashi. A short abstract of the joint RDP invited lecture by Amy Felty is also included. The 27 contributed papers were selected from 61 submissions of generally very high quality, and the Program Committee had a hard time making the selection. The editor would like to thank everyone who submitted a paper and to express his regret that many interesting works could not be included. The editor also wishes to thank the invited speakers, the members of the Program and Organizing Committees, the Publicity Chair, and the referees for their joint e?ort towards the success of the conference. The support from the Nara Convention Bureau is gratefully acknowledged. The typed lambda calculus continues to be an important tool in logic and theoretical computer science. Since 1993, the research progress in this area has been documented by the TLCA proceedings. The present volume contributes to this tradition.