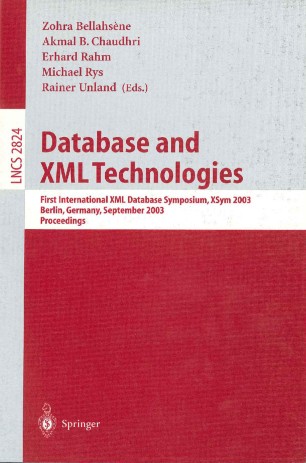 The Extensible Markup Language (XML) is playing an increasingly important role in the exchange of a wide variety of data on the Web and elsewhere. The database c- munity is interested in XML because it can be used to represent a variety of data f- mats originating in different kinds of data repositories while providing structure and the possibility to add type information. The theme of this symposium is the combination of database and XML te- nologies. Today, we see growing interest in using these technologies together for many Web-based and database-centric applications. XML is being used to publish data from database systems on the Web by providing input to content generators for Web pages, and database systems are increasingly being used to store and query XML data, often by handling queries issued over the Internet. As database systems incre- ingly start talking to each other over the Web, there is a fast-growing interest in using XML as the standard exchange format for distributed query processing. As a result, many relational database systems export data as XML documents, import data from XML documents, provide query and update capabilities for XML data. In addition, so-called native XML database and integration systems are appearing on the database market, and it’s claimed that they are especially tailored to store, maintain and easily access XML documents.