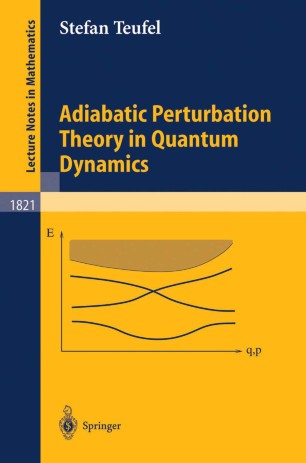 Separation of scales plays a fundamental role in the understanding of the dynamical behaviour of complex systems in physics and other natural sciences. A prominent example is the Born-Oppenheimer approximation in molecular dynamics. This book focuses on a recent approach to adiabatic perturbation theory, which emphasizes the role of effective equations of motion and the separation of the adiabatic limit from the semiclassical limit.

A detailed introduction gives an overview of the subject and makes the later chapters accessible also to readers less familiar with the material. Although the general mathematical theory based on pseudodifferential calculus is presented in detail, there is an emphasis on concrete and relevant examples from physics. Applications range from molecular dynamics to the dynamics of electrons in a crystal and from the quantum mechanics of partially confined systems to Dirac particles and nonrelativistic QED.

"The present monograph is devoted to a generalizing approach to adiabatic theory developed in recent years … . The book is clearly structured. The introduction gives an excellent non-technical overview of the problems and ideas involved. … this very readable book is a valuable reference for researchers in mathematical physics." (Karl Michael Schmidt, Mathematical Reviews, Issue 2006 g)