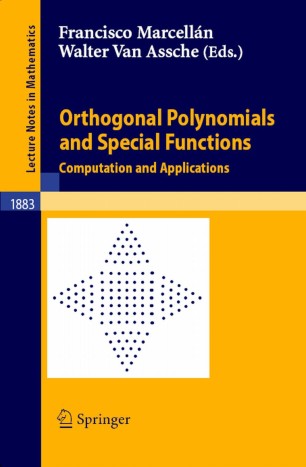 Francisco Marcellán is full professor of applied mathematics at the Universidad Carlos III de Madrid in Leganés (Spain) where he served as vice rector of research. In the past he has been teaching at the universities of Zaragoza, Santiago de Compostela and the Polytécnica de Madrid and was recently a visiting professor at the Georgia Institute of Technology. He was program director of the SIAM activity group on Orthogonal Polynomials and Special Functions from 1999 to 2005. Presently he is the director of the Spanish National Agency for Quality Assurance and Accreditation (ANECA). He has several publications in mathematical analysis (most particularly special functions and approximation) and linear algebra.

Walter Van Assche is full professor of mathematics at the Katholieke Universiteit Leuven in Belgium and was a research director of the Belgian National Fund for Scientific Research. He was vice chair of the SIAM activity group on Orthogonal Polynomials and Special Functions from 1999 to 2005 and is on the editorial board of the Journal of Approximation Theory and the Journal of Difference Equations and Applications. He is the author of Asymptotics for Orthogonal Polynomials (Lecture Notes in Mathematics 1265) and wrote two chapters in M.E.H. Ismail’s book Classical and Quantum Orthogonal Polynomials in one Variable.