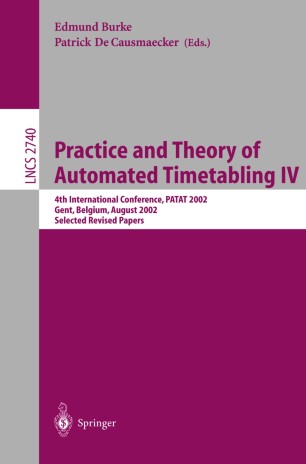 PATAT: International Conference on the Practice and Theory of Automated Timetabling

Thisvolumecontainsaselectionofpapersfromthe4thInternationalConference on the Practice and Theory of Automated Timetabling (PATAT 2002) held in Gent, August 21–23, 2002. Since the ?rst conference in Edinburgh in 1995, the range of timetabling applications at the conferences has become broader and more diverse. In the s- ected papers volume from the 1995 conference, there were just two contributions (out of 22) which did not speci?cally address school and university timetabling. In the selected papers volume from the 1997 conference in Toronto, the number of papers which tackled non-educational problems increased. Two of the papers addressed more than one timetabling application. In both of these papers, educational applications were considered in addition to other applications. A further three papers were concerned with non-educational applications. The conference steering and programme committees have worked hard to attract a wide range of timetabling applications. In the conference held in Konstanz in 2000, the diversi?cation of timetabling problems increased signi?cantly. Of the 21 selected papers in the postconference volume, just 13 were speci?cally concerned with educational timetabling. In the previous volumes, the papers had been sectioned according to solution technique. In the Konstanz volume the papers were classi?ed according to application domains. One section of the volume was entitled “Employee Timetabling,” while sports timetabling, air?eet scheduling, and general software architectures for timetabling were also represented. In the present volume, more than one-third of the 21 papers discuss problems in application areas other than academic and educational ones. Sports timetabling and hospital timetabling are particularly well represented.