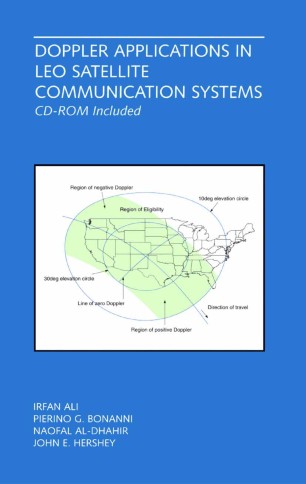 Part of the The International Series in Engineering and Computer Science book series (SECS, volume 656)

Doppler Applications in LEO Satellite Communication Systems develops and presents an important class of techniques useful in the construction of little Low Earth Orbit (LEO) satellite communication systems. It centers on the very significant Doppler shift that attends communications through a LEO satellite and shows how this phenomenon can be exploited for an unexpected benefit. The techniques taught in the book are expected to be particularly attractive to system engineers because ground-based transceivers must generally compensate for the large Doppler component and therefore the necessary receiver processing loops are often already in place and expensed.
This volume starts with a recounting of the characteristics of a LEO satellite and its orbit. The 2nd chapter addresses the LEO orbital geometry and reviews the Doppler effect attending LEO communications. Chapter three is focused on the important task of estimating the Doppler at a ground terminal. Appropriate signal processing algorithms are reviewed. Chapter four is concerned with predicting LEO satellite visibility. Chapters five and six are, respectively, devoted to the use of the significant LEO Doppler as an aid in a new traffic flow control protocol and as an aid for effecting communications power control. The last chapter describes MATLAB® based analysis.
Doppler Applications in LEO Satellite Communication Systems provides a thorough review of the LEO Doppler phenomenon.