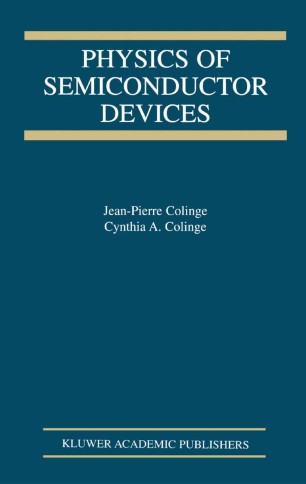 Physics of Semiconductor Devices is a textbook aimed at college undergraduate and graduate teaching. It covers both basic classic topics such as energy band theory and the gradual-channel model of the MOSFET as well as advanced concepts and devices such as MOSFET short-channel effects, low-dimensional devices and single-electron transistors. As a prerequisite, this text requires mathematics through differential equations and modern physics where students are introduced to quantum mechanics. Concepts are introduced to the reader in a simple way, often using comparisons to everyday-life experiences such as simple fluid mechanics. They are then explained in depth and mathematical developments are fully described.
Physics of Semiconductor Devices contains a list of problems that can be used as homework assignments or can be solved in class to exemplify the theory. Many of these problems make use of Matlab and are aimed at illustrating theoretical concepts in a graphical manner. A series of these Matlab problems is based on a simple finite-element solution of semiconductor equations. These yield the exact solution to equations that have no analytical solutions and are usually solved using approximations, such as the depletion approximation. The exact numerical solution can then be graphically compared to the solution using the approximation.
The different chapters of Physics of Semiconductor Devices cover the following material: Energy Band Theory. Theory of Electrical Conduction. Generation/Recombination Phenomena. The PN Junction Diode. Metal-semiconductor contacts. JFET and MESFET. The MOS Transistor. The Bipolar Transistor. Heterojunction Devices. Quantum-Effect Devices. Semiconductor Processing.