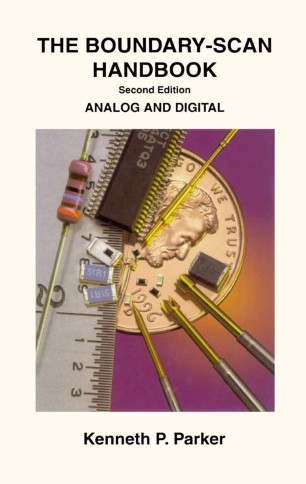 Boundary-Scan, formally known as IEEE/ANSI Standard 1149.1-1990, is a collection of design rules applied principally at the Integrated Circuit (IC) level that allow software to alleviate the growing cost of designing, producing and testing digital systems. A fundamental benefit of the standard is its ability to transform extremely difficult printed circuit board testing problems that could only be attacked with ad-hoc testing methods into well-structured problems that software can easily deal with.
IEEE standards, when embraced by practicing engineers, are living entities that grow and change quickly. The Boundary-Scan Handbook, Second Edition: Analog and Digital is intended to describe these standards in simple English rather than the strict and pedantic legalese encountered in the standards.
The 1149.1 standard is now over eight years old and has a large infrastructure of support in the electronics industry. Today, the majority of custom ICs and programmable devices contain 1149.1. New applications for the 1149.1 protocol have been introduced, most notably the `In-System Configuration' (ISC) capability for Field Programmable Gate Arrays (FPGAs).
The Boundary-Scan Handbook, Second Edition: Analog and Digital updates the information about IEEE Std. 1149.1, including the 1993 supplement that added new silicon functionality and the 1994 supplement that formalized the BSDL language definition. In addition, the new second edition presents completely new information about the newly approved 1149.4 standard often termed `Analog Boundary-Scan'. Along with this is a discussion of Analog Metrology needed to make use of 1149.1. This forms a toolset essential for testing boards and systems of the future.