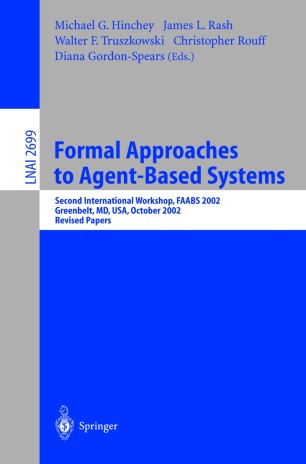 The idea of a FAABS workshop was first conceived in 1998 at the NASA Goddard Space Flight Center, while the Agent Technology Development Group in the Advanced Architectures and Automation Branch (Code 588) was developing a prototype agent community to automate satellite ground operations. While developing this system, several race conditions arose within and between agents. Due to the complexity of the agents and the communications between them, it was decided that a formal approach was needed to specify the agents and the communications between them, so that the system could be checked for additional errors. A formal model of the inter-agent communications was developed, with the expectation that this would enable us to find more errors. Success in this convinced us of the importance of using formal methods to model agent-based systems. To share our own experiences and to learn how others were approaching these issues, we decided to hold a workshop on formal methods and agent-based systems. The response was overwhelming. The result was the first FAABS workshop, which was held at the NASA Goddard Space Flight Center. Posters, paper presentations, panels, and an invited talk by J Moore stimulated much discussion and subsequent collaboration.