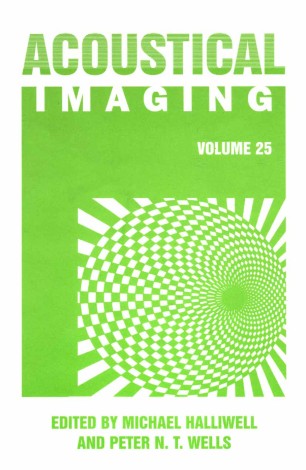 The origin ofthe International Acoustical Imaging Symposium series can be traced to 1967, when a meeting on acoustical holography was held in C alifornia. In those days, acoustical holography was at the leading edge of research but, as the importance of this subject waned, so the title of the series was changed from Acoustical Holography to Acoustical Imaging in 1978. The early Symposia were held at various venues in the United States. In 1980. the series became international, with the Symposium that year taking place in Cannes in France. The pattern now is to try to met alternately in the USA and in another part of the world so that active researchers everywhere can conveniently attend at a reasonably high frequency. It was a great privilege for us in Bristol in the United Kingdom to be chosen to host the 25th Symposium, which convened on 19 March 2000 and spread over four days. We were blessed not only by good weather, but also by the attendance ofnearly 100 pa rticipants who came from 17 c ountries. A large number of papers were accepted for presentation, either orally or as posters. Whether an oral presentation or a poster, all were considered to have equal merit, and no distinction is made between them in the published proceedings. There were no parallel sessions, so every participant could attend every presentation. The re sultant disciplinary cross fertilisation maintained the t radition of past Symposia.