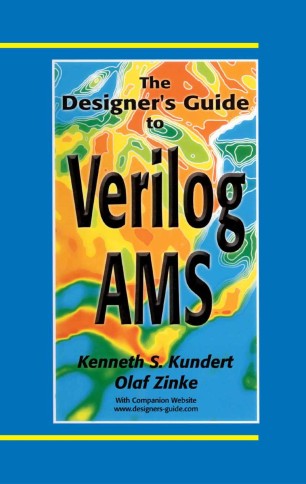 The Designer’s Guide to Verilog-AMS, June 2004

The Verilog Hardware Description Language (Verilog-HDL) has long been the most popular language for describing complex digital hardware. It started life as a prop- etary language but was donated by Cadence Design Systems to the design community to serve as the basis of an open standard. That standard was formalized in 1995 by the IEEE in standard 1364-1995. About that same time a group named Analog Verilog International formed with the intent of proposing extensions to Verilog to support analog and mixed-signal simulation. The first fruits of the labor of that group became available in 1996 when the language definition of Verilog-A was released. Verilog-A was not intended to work directly with Verilog-HDL. Rather it was a language with Similar syntax and related semantics that was intended to model analog systems and be compatible with SPICE-class circuit simulation engines. The first implementation of Verilog-A soon followed: a version from Cadence that ran on their Spectre circuit simulator. As more implementations of Verilog-A became available, the group defining the a- log and mixed-signal extensions to Verilog continued their work, releasing the defi- tion of Verilog-AMS in 2000. Verilog-AMS combines both Verilog-HDL and Verilog-A, and adds additional mixed-signal constructs, providing a hardware description language suitable for analog, digital, and mixed-signal systems. Again, Cadence was first to release an implementation of this new language, in a product named AMS Designer that combines their Verilog and Spectre simulation engines.