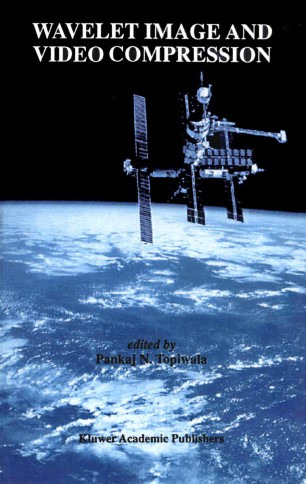 Part of the The International Series in Engineering and Computer Science book series (SECS, volume 450)

An exciting new development has taken place in the digital era that has captured the imagination and talent of researchers around the globe - wavelet image compression. This technology has deep roots in theories of vision, and promises performance improvements over all other compression methods, such as those based on Fourier transforms, vectors quantizers, fractals, neural nets, and many others. It is this revolutionary new technology that is presented in Wavelet Image and Video Compression, in a form that is accessible to the largest audience possible.
Wavelet Image and Video Compression is divided into four parts. Part I, Background Material, introduces the basic mathematical structures that underly image compression algorithms with the intention of providing an easy introduction to the mathematical concepts that are prerequisites for the remainder of the book. It explains such topics as change of bases, scalar and vector quantization, bit allocation and rate-distortion theory, entropy coding, the discrete-cosine transform, wavelet filters and other related topics. Part II, Still Image Coding, presents a spectrum of wavelet still image coding techniques. Part III, Special Topics in Still Image Coding, provides a variety of example coding schemes with a special flavor in either approach or application domain. Part IV, Video Coding, examines wavelet and pyramidal coding techniques for video data.
Wavelet Image and Video Compression serves as an excellent reference and may be used as a text for advanced courses covering the subject.