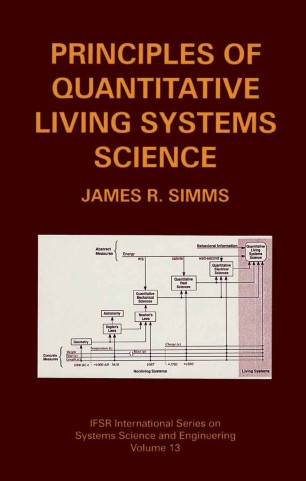 In 1978, when the book Living Systems was published, it contained the prediction that the sciences that were concerned with the biological and social sciences would, in the future, be stated as rigorously as the “hard sciences” that study such nonliving phenomena as temperature, distance, and the interaction of chemical elements. Principles of Quantitative Living Systems Science, the first of a planned series of three books, begins an attempt to fulfill that prediction. The view that living things are similar to other parts of the physical world, differing only in their complexity, was explicitly stated in the early years of the twentieth century by the biologist Ludwig von Bertalanffy. His ideas could not be published until the end of the war in Europe in the 1940s. Von Bertalanffy was strongly opposed to vitalism, the theory current among biologists at the time that life could only be explained by recourse to a “vital principle” or God. He c- sidered living things to be a part of the natural order, “systems” like atoms and molecules and planetary systems. Systems were described as being made up of a number of interrelated and interdependent parts, but because of the interrelations, the total system became more than the sum of those parts. These ideas led to the development of systems movements, in both Europe and the United States, that included not only biologists but scientists in other fields as well. Systems societies were formed on both continents.