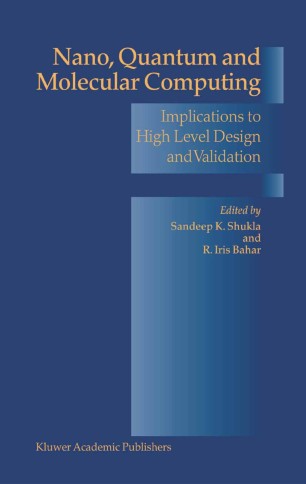 One of the grand challenges in the nano-scopic computing era is guarantees of robustness. Robust computing system design is confronted with quantum physical, probabilistic, and even biological phenomena, and guaranteeing high reliability is much more difficult than ever before. Scaling devices down to the level of single electron operation will bring forth new challenges due to probabilistic effects and uncertainty in guaranteeing 'zero-one' based computing. Minuscule devices imply billions of devices on a single chip, which may help mitigate the challenge of uncertainty by replication and redundancy. However, such device densities will create a design and validation nightmare with the shear scale.
The questions that confront computer engineers regarding the current status of nanocomputing material and the reliability of systems built from such miniscule devices, are difficult to articulate and answer. We have found a lack of resources in the confines of a single volume that at least partially attempts to answer these questions.
We believe that this volume contains a large amount of research material as well as new ideas that will be very useful for some one starting research in the arena of nanocomputing, not at the device level, but the problems one would face at system level design and validation when nanoscopic physicality will be present at the device level.