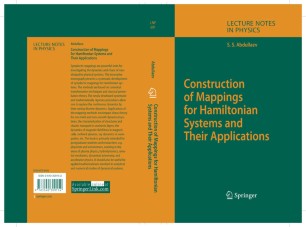 Construction of Mappings for Hamiltonian Systems and Their Applications

Based on the method of canonical transformation of variables and the classical perturbation theory, this innovative book treats the systematic theory of symplectic mappings for Hamiltonian systems and its application to the study of the dynamics and chaos of various physical problems described by Hamiltonian systems. It develops a new, mathematically-rigorous method to construct symplectic mappings which replaces the dynamics of continuous Hamiltonian systems by the discrete ones. Applications of the mapping methods encompass the chaos theory in non-twist and non-smooth dynamical systems, the structure and chaotic transport in the stochastic layer, the magnetic field lines in magnetically confinement devices of plasmas, ray dynamics in waveguides, etc. The book is intended for postgraduate students and researches, physicists and astronomers working in the areas of plasma physics, hydrodynamics, celestial mechanics, dynamical astronomy, and accelerator physics. It should also be useful for applied mathematicians involved in analytical and numerical studies of dynamical systems.

"The aim of this book is to introduce the reader into the modern theory of Hamiltonian mappings. The book starts by describing the classical methods and theorems such as Jacobi’s Theorem, action variables etc. After, the classical perturbation theory is explained. Many results are illustrated on concrete examples form physics and mechanics. The basic elements of KAM theory are explained for both smooth and non-smooth mappings. This makes the book a valuable source for specialists working with applications of discrete maps." (Alexei Tsygvintsev, Zentralblatt MATH, Vol. 1106 (8), 2007)