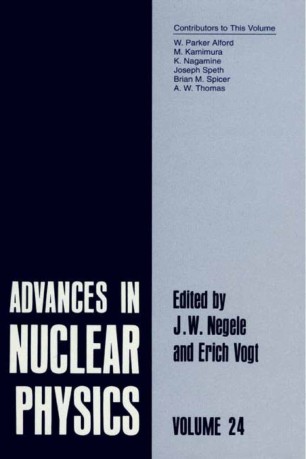 Part of the Advances in Nuclear Physics book series (volume 24)

The three articles of the present volume pertain to very different subjects, all ofconsiderable current interest. The first reviews the fascinating history ofthe search for nucleon substructure in the nucleus using the strength ofGamow– Teller excitations. The second deals with deep inelastic lepton scattering as a probe ofthe non-perturbative structure of the nucleon. The third describes the present state ofaffairs for muon catalyzed fusion, an application of nuclear physics which many new experiments have helped to elucidate. This volume certainly illustrates the broad range ofphysics within our field. The article on Nucleon Charge-Exchange Reactions at Intermediate Energy, by Parker Alford and Brian Spicer, reviews recent data which has clarified one of the greatest puzzles of nuclear physics during the past two decades, namely, the “missing strength” in Gamow–Teller (GT) transitions. The nucleon-nucleon interaction contains a GT component which has a low-lying giant resonance. The integrated GT strength is subject to a GT sum rule. Early experiments with (n,p) charge exchange reactions found only about half of the strength, required by the sum rule, in the vicinity of the giant resonance. At the time, new theoretical ideas suggested that the GT strength was especially sensitive to renormalization from effects pertaining to nucleon substructure, particularly the delta excitation of the nucleon in the nucleus.

`I agree with the editors in especially recommending Nagamine and Kamimura's article to any nuclear physicist. That article seemed the most elementary, the most suitable ... I definitely recommend this book to anyone interested in nuclear research.' Physics in Canada, July/August 1999