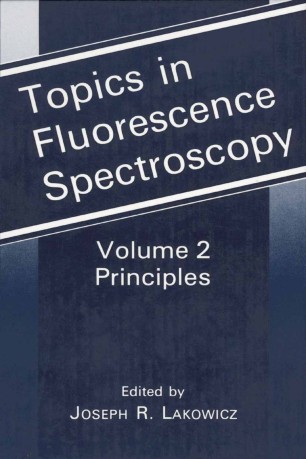 Fluorescence spectroscopy and its applications to the physical and life sciences have evolved rapidly during the past decade. The increased interest in fluorescence appears to be due to advances in time resolution, methods of data analysis, and improved instrumentation. With these advances, it is now practical to perform time-resolved measurements with enough resolution to compare the results with the structural and dynamic features of mac- molecules, to probe the structures of proteins, membranes, and nucleic acids, and to acquire two-dimensional microscopic images of chemical or protein distributions in cell cultures. Advances in laser and detector technology have also resulted in renewed interest in fluorescence for clinical and analytical chemistry. Because of these numerous developments and the rapid appearance of new methods, it has become difficult to remain current on the science of fluorescence and its many applications. Consequently, I have asked the experts in particular areas of fluorescence to summarize their knowledge and the current state of the art. This has resulted in the initial two volumes of Topics in Fluorescence Spectroscopy, which is intended to be an ongoing series which summarizes, in one location, the vast literature on fluorescence spectroscopy. The third volume will appear shortly. The first three volumes are designed to serve as an advanced text. These volumes describe the more recent techniques and technologies (Volume 1), the principles governing fluorescence and the experimental observables (Volume 2), and applications in biochemistry and biophysics (Volume 3).

Dr. J.R. Lakowicz is Professor of Biochemistry at the University of Maryland School of Medicine and Director of the Center for Fluorescence Spectroscopy. Dr. Lakowicz has published over 400 scientific articles, has edited numerous books, holds 16 issued patents, and is the sole author of the widely used text, Principles of Fluorescence Spectroscopy, also published by Kluwer Academic/Plenum Publishers, now in its Second Edition.