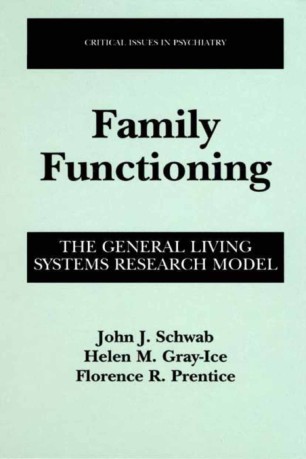 The family, that most fundamentalof human groups, is currently perceived to be changing in response to social, biological, cultural and technological developments in our postmodernsociety. While the observed changes in families have been considered by some sociologists to be evidence of adaptation and, therefore, normal, the authors of this volume, consider them maladaptive. Viewing society from the point of view of clinical psychiatry, they point to greatly increased numbers of children born to single mothers, soaring rates of divorce, a statistically confirmed increase in mental disorders, increase in reported incest, high rates of depression in younger people and escalation of the amount of reported family violence as evidence that the family, as a social institution, is in crisis and can either move toward renewed vitality or continued deterioration. Perceiving a need to obtain information about family functioning that might lead to the increased stability and well-being of this critically important type of system, Dr. John Schwab and his associates designed and camed out a research program that began with a thorough review of relevant literature beginning with LePlay’s study of 300 families in the 1850’sand including important recent statistical studies. They found that although these studies represent advances in understanding the family system, some serious problems with the research remain, one of which is confounding variables such as family function and mental or substance abuse disorders so that if a family member has a problem, such as drug abuse, the family is classifiedasdysfunctional.