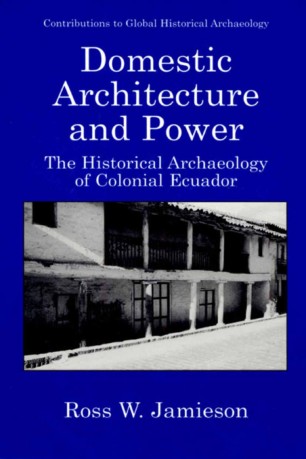 The Historical Archaeology of Colonial Ecuador

Historical archaeology, one of the fastest growing of archaeology’s sub fields in North America, has developed more slowly in Central and p- ticularly South America. Happily, this circumstance is ending as a gr- ing number of recent projects are successfully integrating textual and material culture data in studies of the events and processes of the last 500 years. This interval and this region–often called Ibero-America–have been studied for a century or more by historians with traditional perspectives and emphases focusing on colonial elites and large-scale politico-economic events. Such inclinations fit well into world-system and other core-peri- ery models that have had a major impact on historical thought since the 1970s. Over the past 20 years or so, however, world-system models have come under fire from historians, anthropologists, and others, in part because the emphasis on global trends and the growth of capitalism - nies the importance of understanding variability in local histories and circumstances. Historians have increasingly turned their attention to lo cal, rural, and domestic contexts, thereby illuminating the great diversity of responses to colonial domination that were played out in the vast arena of the Americas. It is not coincidental that this is the intellectual climate in which historical archaeology is establishing itself in Central and South America.