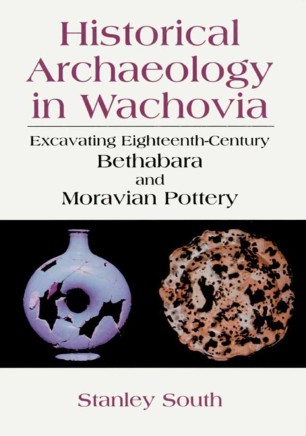 Originally distributed with a different title as a very limited edition of twelve in 1975, Historical Archaeology in Wachovia presents a unique record of the 1753 Moravian town of Bethabara, near Winston-Salem, North Carolina. Stanley South, who led the site's excavation in 1966, fully describes such discoveries as fortifications from the French and Indian War and twenty ruins of various shops and dwellings in the town. He also illustrates methods of ruin excavation and stabilization, including the replacement of palisade posts in the original fort ditch as part of the site's development as Historic Bethabara Park.
Some of the most interesting of South's finds concern the confluence of two traditions of pottery and stoneware production. One of these is represented by forty pottery wheel-thrown types and forms made by the master German potter Gottfried Aust between 1755 and 1771, excavated from the ruin of his shop and kiln waster dump. Additional work at both Bethabara and Salem recovered the waster dumps of Aust's journeyman potter Rudolph Christ, who had also studied with the Staffordshire potter William Ellis. Christ's wares, which demonstrate both German and English influences, are discussed in detail.
Extensively documented and heavily illustrated with over 320 photographs, drawings, and maps, this volume - a classic example of the process of historical archaeology as demonstrated by one of its foremost practitioners in America - is a valuable resource for avocational archaeologists, particularly those living in the Southeast, as well as historical archaeologists, historians, ceramicists, ceramics collectors, students of colonial culture, and museologists.