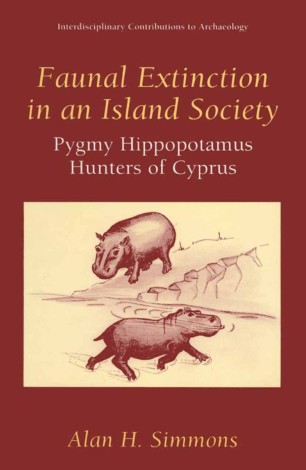 The multidisciplinary research program at Akrotiri Aetokremnos is important, in my op- ion, for three reasons: two empirical and one conceptual. Quite apart from the archaeology, work at the site is a major contribution to island biogeography, in that the Phanourios sample—certainly the best from Cyprus and probably the best anywhere in the world—has already provided, and will continue to provide, important ecological and behavioral data on these intriguing creatures. Dwarfed island faunas are important to our understanding of the complex factors that shape natural selection in ecologically closed environments over the evolutionary long term. At Aetokremnos, we seem to have the “end” of a long sequence of hippo evolution on the island. With comparative studies of other Cypriot hippo faunas, we should be able to pin down the interval of initial colonization by what were, pres- ably, normal-sized hippos, and—if the other sites can be dated—document the dwarfing process in considerable detail. Aetokremnos would still be a significant paleontological - cality, even in the absence of evidence of a human presence there. While reading the text of the monograph, a number of questions strictly related to the paleontology occurred to me. One was how to model the colonization process. There seems to be little question that the large mammals colonized the island by swimming to it (because, I gather, Cyprus has not been connected to the mainland for roughly 5–6 m- lion years).