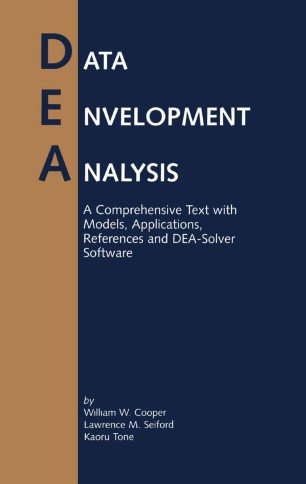 A Comprehensive Text with Models, Applications, References and DEA-Solver Software

In a relatively short period of time Data Envelopment Analysis (DEA) has grown into a powerful quantitative, analytical tool for measuring and evaluating performance. It has been successfully applied to a host of different entities engaged in a wide variety of activities in many contexts worldwide. In many cases evaluations of these entities have been resistant to other approaches because complex, multiple levels of (often) poorly understood relations must be considered. A few examples of these multifaceted problems are (1) maintenance activities of US Air Force bases in geographically dispersed locations, (2) police force efficiencies in the United Kingdom, (3) branch bank performances in Canada, Cyprus, and other countries and (4) the efficiency of universities in performing their education and research functions in the U.S., England, and France. In addition to localized problems, DEA applications have been extended to performance evaluations of `larger entities' such as cities, regions, and countries. These extensions have a wider scope than traditional analyses because they include `social' and `safety-net' expenditures as inputs and various `quality-of-life' dimensions as outputs.
In other applications, DEA has been used to supply new insights into business activities and into the methods that have been used to evaluate these activities. These include `benchmarking' studies of professional organizations including legal and accounting societies, as well as organizational forms--such as evaluating the relative efficiencies of the `mutual' vs. `corporate' forms of organization that are used in the U.S. insurance industry. Finally, DEA can also be used to evaluate objects as well as governmental, business and societal activities. For example, a test study found that DEA compared favorably with traditional engineering approaches for use in evaluating the relative efficiencies of jet aircraft engines. These advantages accrued to DEA because of its ability to simultaneously handle multiple outputs and inputs without having to first specify a system of weights for use in effecting these evaluations.
Data Envelopment Analysis: A Comprehensive Text with Models, Applications, References, and DEA-Solver Software is designed to provide a systematic introduction to DEA and its uses as a multifaceted tool for evaluating problems in a variety of contexts. Each chapter accompanies its developments with simple numerical examples and discussions of actual applications. Emphasis is placed on the use as well as an understanding of DEA and the topics in this book have been selected and treated accordingly. The objective is to introduce students, researchers, and practitioners in business, economics, engineering, and the sciences to Data Envelopment Analysis.
The authors have been involved in DEA's development from the beginning. William Cooper (with Abraham Charnes and Edwardo Rhodes) is a founder of DEA. Lawrence Seiford and Kaoru Tone have been actively involved as researchers and practitioners from its earliest beginnings. All have been deeply involved in uses of DEA in practical applications as well as in the development of its basic theory and methodologies. The result is a textbook grounded in authority, experience and substance.
Please see the book's preface for chapter-by-chapter information on specific features and information on the supporting DEA-Solver software. The preface can be found and downloaded at the internet.