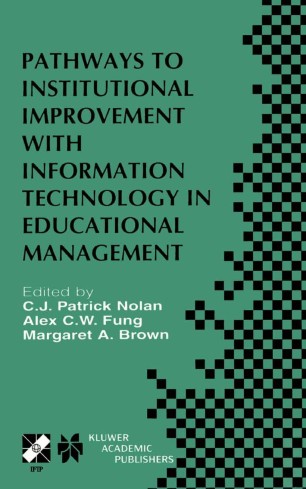 Pathways to Institutional Improvement with Information Technology in Educational Management

New Zealand schools have experienced unprecedented change during the lastdecade. Radicalrestructuringoftheframeworksforbothcurriculumand qualificationsfollowedamovementtowards self-managementin 1989. The curriculum framework, consisting of seven essential learning areas, has been progressively introduced with completionnotexpecteduntil 2002. Thenew Qualifications Framework, based on unit standards, was launched in 1994. The introduction of unit standards signalled an emphatic movement towards the use of internal assessment for awarding qualifications at the seniorsecondaryschoollevel. Eachcoursehadunitstandardsdefined,which described the outcomes and the performance criteria that would be used to determine whether or not the standard had been achieved. Approximately five to eight standards would be used for each full year course and each standard had a number of credits associated with it. The plan, which has since been modified, was for these credits to contribute to a National Certificate of Educational Achievement, at years 12 and 13, and other, subject specific, National Certificates. Secondary schools were faced with the task of recording and reporting 1 unit standardresults to theNew Zealand Qualifications Authority . This, by itself, was not a major issue as the significant suppliers of CSIS had modules availablewhichsatisfiedthis need. Atthistimeamodelwasbeingpresented to school audiences demonstrating how the recording, reporting and evaluation ofassessment data, relating to the curriculumframework, could be relatively straight forward IF there was a common assessment ‘currency’ across the school. This model was converted into software form for demonstration purposes.