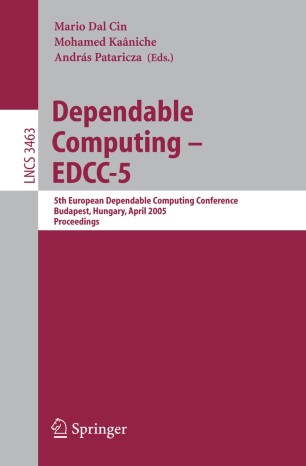 It is always a special honor to chair the European Dependable Computing C- ference (EDCC). EDCC has become one of the well-established conferences in the ?eld of dependability in the European research area. Budapest was selected as the host of this conference due to its traditions in organizing international scienti?c events and its traditional role of serving as a meeting point between East and West. EDCC-5 was the ?fth in the series of these high-quality scienti?c conf- ences. In addition to the overall signi?cance of such a pan-European event, this year’s conference was a special one due to historic reasons. The roots of EDCC date back to the moment when the Iron Curtain fell. Originally, two groups of scientists from di?erent European countries in Western and Eastern Europe – who were active in research and education related to dependability created a – joint forum in order to merge their communities as early as in 1989. This trend has continued up to today. This year’s conference was the ?rst one where the overwhelming majority of the research groups belong to the family of European nations united in the European Union. During the past 16 years we observed that the same roots in all the professional, cultural and scienti?c senses led to a seamless integration of these research communities previously separated ar- ?cially for a long time. EDCC has become one of the main European platforms to exchange new - searchideasinthe?eldofdependability.