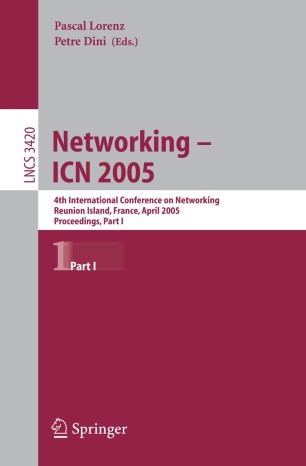 The International Conference on Networking (ICN 2005) was the fourth conf- ence in its series aimed at stimulating technical exchange in the emerging and important ?eld of networking. On behalf of the International Advisory C- mittee, it is our great pleasure to welcome you to the proceedings of the 2005 event. Networking faces dramatic changes due to the customer-centric view, the venue of the next generation networks paradigm, the push from ubiquitous n- working,andthenewservicemodels.Despitelegacyproblems,whichresearchers and industry are still discovering and improving the state of the art, the ho- zon has revealed new challenges that some of the authors tackled through their submissions. InfactICN2005wasverywellperceivedbytheinternationalnetworkingc- munity. A total of 651 papers from more than 60 countries were submitted, from which 238 were accepted. Each paper was reviewed by several members of the Technical Program Committee. This year, the Advisory Committee revalidated various accepted papers after the reviews had been incorporated. We perceived a signi?cant improvement in the number of submissions and the quality of the submissions. TheICN2005programcoveredavarietyofresearchtopicsthatareofcurrent interest,startingwithGridnetworks,multicasting,TCPoptimizations,QoSand security, emergency services, and network resiliency. The Program Committee selected also three tutorials and invited speakers that addressed the latest - search results from the international industries and academia, and reports on ?ndings from mobile, satellite, and personal communications related to 3rd- and 4th-generation research projects and standardization.