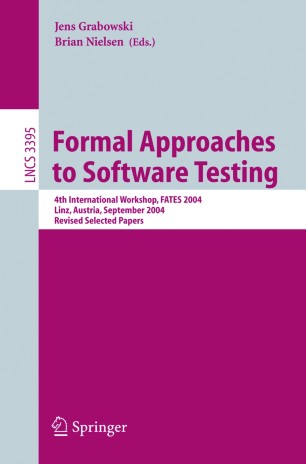 Testing often accounts for more than 50% of the required e?ort during system development.Thechallengeforresearchistoreducethesecostsbyprovidingnew methods for the speci?cation and generation of high-quality tests. Experience has shown that the use of formal methods in testing represents a very important means for improving the testing process. Formal methods allow for the analysis andinterpretationofmodelsinarigorousandprecisemathematicalmanner.The use of formal methods is not restricted to system models only. Test models may alsobeexamined.Analyzingsystemmodelsprovidesthepossibilityofgenerating complete test suites in a systematic and possibly automated manner whereas examining test models allows for the detection of design errors in test suites and their optimization with respect to readability or compilation and execution time. Due to the numerous possibilities for their application, formal methods have become more and more popular in recent years. The Formal Approaches in Software Testing (FATES) workshop series also bene?ts from the growing popularity of formal methods. After the workshops in Aalborg (Denmark, 2001), Brno (Czech Republic, 2002) and Montr´ eal (Canada, 2003), FATES 2004 in Linz (Austria) was the fourth workshop of this series. Similar to the workshop in 2003, FATES 2004 was organized in a?liation with the IEEE/ACM Conference on Automated Software Engineering (ASE 2004). FATES 2004 received 41 submissions. Each submission was reviewed by at least three independent reviewers from the Program Committee with the help of some additional reviewers. Based on their evaluations, 14 full papers and one wo- in-progress paper from 11 di?erent countries were selected for presentation.