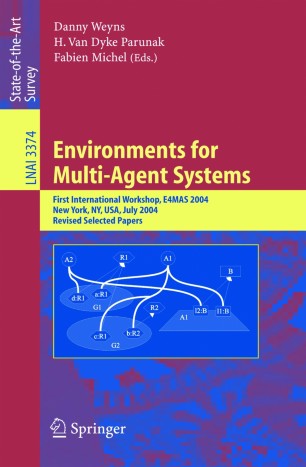 The modern ?eld of multiagent systems has developed from two main lines of earlier research. Its practitioners generally regard it as a form of arti?cial intelligence (AI). Some of its earliest work was reported in a series of workshops in the US dating from1980,revealinglyentitled,“DistributedArti?cialIntelligence,”andpioneers often quoted a statement attributed to Nils Nilsson that “all AI is distributed. ” The locus of classical AI was what happens in the head of a single agent, and much MAS research re?ects this heritage with its emphasis on detailed modeling of the mental state and processes of individual agents. From this perspective, intelligenceisultimatelythepurviewofasinglemind,thoughitcanbeampli?ed by appropriate interactions with other minds. These interactions are typically mediated by structured protocols of various sorts, modeled on human conver- tional behavior. But the modern ?eld of MAS was not born of a single parent. A few - searchershavepersistentlyadvocatedideasfromthe?eldofarti?ciallife(ALife). These scientists were impressed by the complex adaptive behaviors of commu- ties of animals (often extremely simple animals, such as insects or even micro- ganisms). The computational models on which they drew were often created by biologists who used them not to solve practical engineering problems but to test their hypotheses about the mechanisms used by natural systems. In the ar- ?cial life model, intelligence need not reside in a single agent, but emerges at the level of the community from the nonlinear interactions among agents. - cause the individual agents are often subcognitive, their interactions cannot be modeled by protocols that presume linguistic competence.