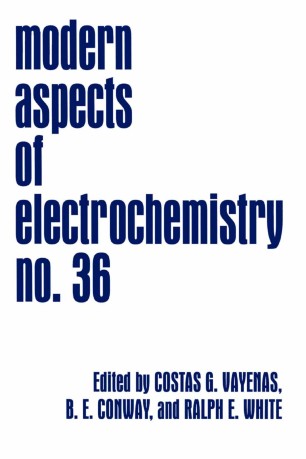 Modern Aspects of Electrochemistry No. 36

This volume of Modern Aspects contains a remarkable spread of topics covered in an authoritative manner by some internationally renowned specialists. In a seminal chapter Drs. Babu, Oldfield and Wieckowski demonstrate eloquently the strength of electrochemical nuclear magnetic resonance (EC-NMR) to study in situ both sides of the electrochemical interface via the simultaneous use of and This powerful non-invasive technique brings new insights to both fundamental and practical key aspects of electrocatalysis, including the design of better anodes for PEM fuel cells. The recent impressive advances in the use of rigorous ab initio quantum chemical calculations in electrochemistry are described in a remarkable chapter by Marc Koper, one of the leading protagonists in this fascinating area. This lucid chapter is addressed to all electrochemists, including those with very little prior exposure to quantum chemistry, and demonstrates the usefulness of ab initio calculations, including density functional theory (DFT) methods, to understand several key aspects of fuel cell electrocatalysis at the molecular level. The most important macroscopic and statistical thermodynamic models developed to describe adsorption phenomena on electrodes are presented critically in a concise and authoritative chapter by Panos Nikitas. The reader is guided through the seminal contributions of Frumkin, Butler, Bockris, Guidelli and others, to the current state of the art adsorption isotherms, which are both rigorous, and in good agreement with experiment.