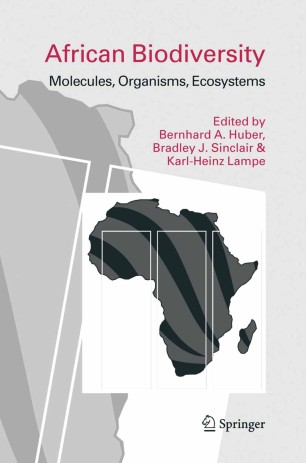 In May 2004, the Alexander Koenig Zoological Research Museum hosted the Fifth International Symposium on Tropical Biology. This series was established at the ZFMK in the early 1980s, and has variably focused on systematics and ecology of tropical organisms, with an emphasis on Africa. Previous volumes are those edited by Schuchmann (1985), Peters and Hutterer (1990), Ulrich (1997), and Rheinwald (2000). The symposium in 2004 was organized by the Entomology Department under the direction of Michael Schmitt. The intention was to focus on Africa rather than on a particular taxon, and to highlight biodiversity at all levels ranging from molecules to ecosystems. This focus was timely partly because of the currently running BIOTA Africa programmes (BIOdiversity Monitoring Transect Analysis in Africa). BIOTA is an interdisciplinary research project focusing on sustainable use and conservation of biodiversity in Africa (http://www.biote-africa.de). Session titles were Biogeography and Speciation Processes, Phylogenetic Patterns and Systematics, Diversity Declines and Conservation, and Applied Biodiversity Informatics. Each session was opened by an invited speaker, and all together 77 lectures and 59 posters were presented. There were over 200 participants and it was gratifying to us to meet colleagues from 26 nations, including Russia, Ukraine, Japan, USA, and ten African countries. We thank all participants for their valuable contributions.