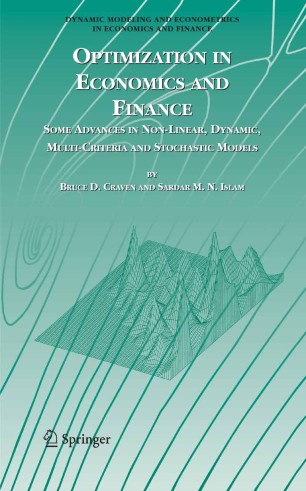 Optimization in Economics and Finance

Some Advances in Non-Linear, Dynamic, Multi-Criteria and Stochastic Models

Part of the Dynamic Modeling and Econometrics in Economics and Finance book series (DMEF, volume 7)

Many optimization questions arise in economics and finance; an important example of this is the society's choice of the optimum state of the economy (the social choice problem). Optimization in Economics and Finance extends and improves the usual optimization techniques, in a form that may be adopted for modeling social choice problems. Problems discussed include: when is an optimum reached; when is it unique; relaxation of the conventional convex (or concave) assumptions on an economic model; associated mathematical concepts such as invex and quasimax; multiobjective optimal control models; and related computational methods and programs. These techniques are applied to economic growth models (including small stochastic perturbations), finance and financial investment models (and the interaction between financial and production variables), modeling sustainability over long time horizons, boundary (transversality) conditions, and models with several conflicting objectives. Although the applications are general and illustrative, the models in this book provide examples of possible models for a society's social choice for an allocation that maximizes welfare and utilization of resources. As well as using existing computer programs for optimization of models, a new computer program, named SCOM, is presented in this book for computing social choice models by optimal control.