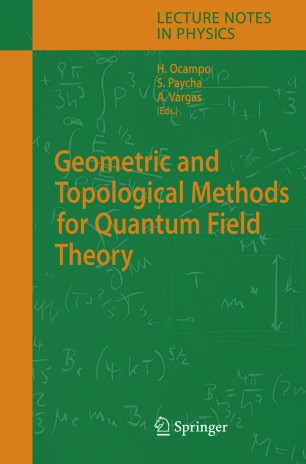 This volume offers an introduction, in the form of four extensive lectures, to some recent developments in several active topics at the interface between geometry, topology and quantum field theory. The first lecture is by Christine Lescop on knot invariants and configuration spaces, in which a universal finite-type invariant for knots is constructed as a series of integrals over configuration spaces. This is followed by the contribution of Raimar Wulkenhaar on Euclidean quantum field theory from a statistical point of view. The author also discusses possible renormalization techniques on noncommutative spaces. The third lecture is by Anamaria Font and Stefan Theisen on string compactification with unbroken supersymmetry. The authors show that this requirement leads to internal spaces of special holonomy and describe Calabi-Yau manifolds in detail. The last lecture, by Thierry Fack, is devoted to a K-theory proof of the Atiyah-Singer index theorem and discusses some applications of K-theory to noncommutative geometry. These lectures notes, which are aimed in particular at graduate students in physics and mathematics, start with introductory material before presenting more advanced results. Each chapter is self-contained and can be read independently.