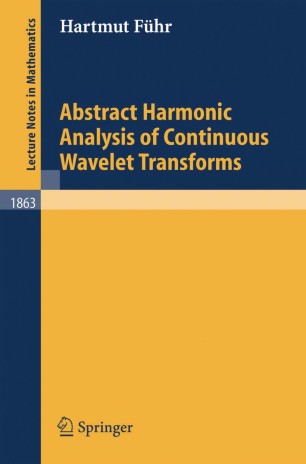 This volume contains a systematic discussion of wavelet-type inversion formulae based on group representations, and their close connection to the Plancherel formula for locally compact groups. The connection is demonstrated by the discussion of a toy example, and then employed for two purposes: Mathematically, it serves as a powerful tool, yielding existence results and criteria for inversion formulae which generalize many of the known results. Moreover, the connection provides the starting point for a – reasonably self-contained – exposition of Plancherel theory. Therefore, the book can also be read as a problem-driven introduction to the Plancherel formula.

"It has become evident that the one-dimensional continuous wavelet transform has a natural foundation in unitary representation theory. … also various multidimensional generalizations as well as the windowed Fourier transform can be treated within the general context of discrete series transformations. … The present book develops a unified theory in an even more general setting, going beyond the discrete series. … The book is very well written and can be recommended to anyone interested in wavelet analysis and/or representation theory." (Margit Rösler, Mathematical Reviews, Issue 2006 m)

"This book deals with generalizations, valid for general locally compact groups and unitary representations on arbitrary Hilbert spaces. … The book is well written, and it contains a nice blend of the general analysis and the concrete examples in wavelet analysis and Gabor analysis. The book is strongly recommended for readers with interest in abstract harmonic analysis, and to readers who are familiar with wavelets and want to understand them from a broader perspective." (Ole Christensen, Zentralblatt MATH, Vol. 1060, 2005)